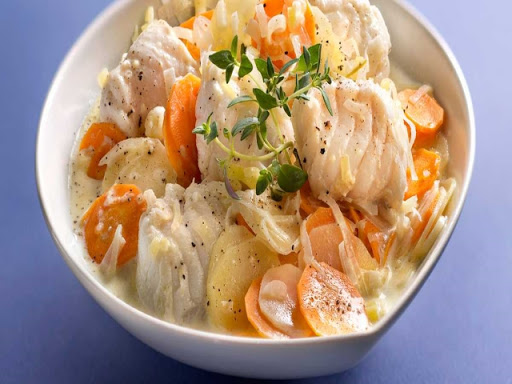 You can make a bourride with any fish, but a combination of two or more is best, and you will need bones and heads to make the broth. You can also make the broth with little inexpensive fish sold in ethnic markets, but you may have to clean them yourself. When you buy your fish, have them cleaned and filleted, and explain that you need the bones and heads for soup. If you like fish skin, have the fish scaled before it is filleted. About half of the aioli called for here ends up in the soup, and the rest is passed at the table for guests to dollop into their soup or spread on little toasts. (If you are short on time, see also Quick Fix for Bottled Mayonnaise.) 1 pinch saffron in 1 tablespoon water.

– 2 pounds small, inexpensive fish such as whiting, cleaned and cut into 2-inch sections.

– 24 slices baguette, toasted on one side under the broiler.

Step 1:Add the saffron and its soaking water to the aioli and mix well. Taste and add more salt if needed.

Step 2:To make the soup, begin by making the broth. In a large pot, combine the fish bones and heads, the whiting, wine, Pernod, tomatoes, bouquet garni, and about 2 quarts water. Bring to a gentle simmer and simmer for 30 minutes. Work through a coarse strainer or a food mill and then through a fine-mesh strainer.

Step 3:Cut the fish into pieces about 1 inch on each side. You want an even number of pieces, so that everyone gets the same number of pieces of each type of fish. If you are leaving the skin on, sauté the pieces as described in “What to Do with the Skin.” Arrange the pieces on sheet pans, with thick pieces on one sheet pan, and thinner pieces on another, if they are not all the same thickness. Season with salt and pepper and refrigerate until needed.

Step 4:About 20 minutes before serving, preheat the oven to 400°F. Bring the broth to a simmer in a stockpot. Put half of the aioli into a heatproof bowl large enough to hold at least half of the soup. Put the other half into a serving bowl and set it on the table with a spoon. Slide the fish pieces into the oven, giving them about 10 minutes per inch of thickness. Whisk about half of the simmering broth into the aioli. Pour this mixture back into the pot, turn the heat to very low, and stir for about 3 minutes, or until the soup thickens slightly. Don’t let it boil, or the egg yolks in the aioli will curdle. Season with salt and pepper.

Step 5:Arrange the fish on heated soup plates and ladle over the broth. Pass the toasts at the table to spread with aioli and dip in the soup.