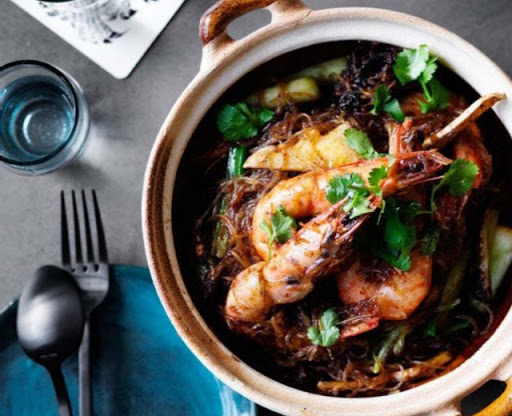 This dish is found mostly in Chinatown in Bangkok, but it deserves to be eaten everywhere,” says David Thompson. “The noodles are dry and that’s why they really do benefit from a good marinade. Toss and turn the noodles often to ensure an even distribution of the sauce. I love it when the noodles are overcooked and almost burnt on the edges. Take them that far when you cook them and you’ll see what I mean.” This recipe can be started a day ahead to marinate the noodles

– 4½ spring onions, trimmed and cut into.

– 2 small coriander roots with some stalk.

Step 1:For marinated noodles, soak noodles in a bowl of cold water until just softened (about 1 hour). Drain well, then cut with scissors into manageable lengths, about 10cm or so, and set aside in a colander. Lightly bruise spring onions, garlic, ginger and coriander root, then combine in a bowl with remaining ingredients and noodles. Turn to coat and combine well, then refrigerate to marinate (6 hours or overnight).

Step 2:Preheat oven to 250C. Warm a 1.5 litre Chinese claypot or 1.5 litre flameproof casserole (see note) for a few minutes over medium-high heat. Meanwhile, reincorporate the marinade into the noodles by turning with your hands. Melt lard in claypot then add a piece or two of ginger and some spring onions from the marinade and stir until coloured (2-3 minutes). Add half the noodle mixture, followed by prawns, then add remaining noodles, stir, then cook without stirring, until sizzling and coloured (2-3 minutes). Cover with a lid and bake in oven, without lifting the lid, until prawns are pink and cooked.

Step 3:Turn and stir the noodles; don’t worry if they have stuck to the pot – these crunchy, charred bits are the best part. The finished dish should be quite dry and the prawns should be cooked through and tempting. Serve sprinkled with chopped coriander.

Note : To remove a prawn’s digestive tract, bend the head downwards and ease it out through the gap between the head and body with a wooden skewer. Dark Chinese wine is available from Chinese grocers; if it’s unavailable use Shaoxing wine. Dry-roast whole seeds (see cook’s notes p200), then grind in a spice grinder or with a mortar and pestle. Ground galangal is available from select large Asian supermarkets. If you use a casserole, the cooking time may vary. Wine suggestion GranMonte Verdehlo or Collector Lamp Lit Marsanne.